Addmore is an Antwerp-based online creative agency founded by Robin Waroquier and Wout Hardy. They cover a wide spectrum of services, including strategy, webdesign, online marketing and as of recently: branding. Addmore and MMCreated work together on a regular basis. However, their own branding left something to be desired, so they commissioned us to elevate their looks and feels. 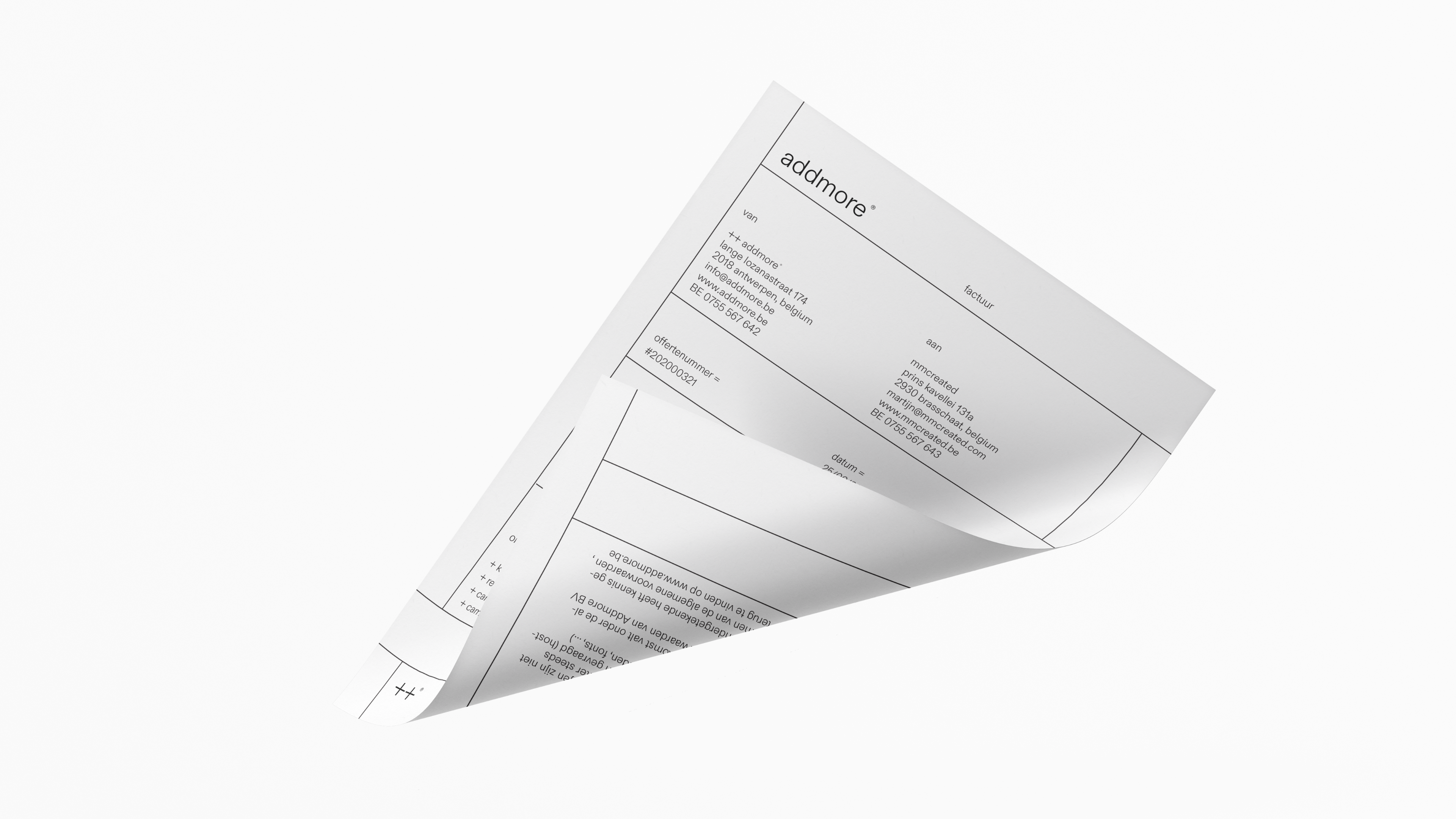 The man-apes of the field had none of these attributes, and
they were on the long, pathetic road to racial extinction.
About twenty of them occupied a group of caves overlooking
a small, parched valley, divided by a sluggish, brown stream.

The tribe had always been hungry, and now it was starving.
As the first dim glow of dawn creeps into the cave, Moonwatcher
discovers that his father has died during the night. He did not know
the Old One was his father, for such a relationship was beyond
his understanding. but as he stands looking down at the emac-
iated body he feels something, something akin to sadness. Then
he carries his dead father out of the cave, and leaves him for the
hyenas.

Among his kind, Moonwatcher is almost a giant. He is nearly
five feet high, and though badly undernourished, weighs over
a hundred pounds. His hairy, muscular body is quite man-like,
and his head is already nearer man than ape. The forehead is
low, and there are great ridges over the eye-sockets, yet he
unmistakably holds in his genes the promise of humanity. As
he looks out now upon the hostile world, there is already
From their side of the stream, in the never violated safety of
their own territory, the Others see Moonwatcher and fourteen
males of his tribe appear from behind a small hillock over-
looking the stream, silhouetted against the dawn sky.

The Others begin to scream their daily challenge. But today
something is different, though the Others do not immediatly
recognize this fact.

Instead of joining the verbal onslaught, as they had always done,
Moonwatcher and his small band decended from the rise, and
begin to move forward to the stream with a quiet purposefulness
never befor seen.

As the Others watch the figures silently approaching in the
morning mist, they become aware of the terrible strangness
of this encounter, and their rage gradually subsides down to
an uneasy silence.

At the water's edge, Moonwatcher and his band stop. They
carry their bone clubs and bone knives. 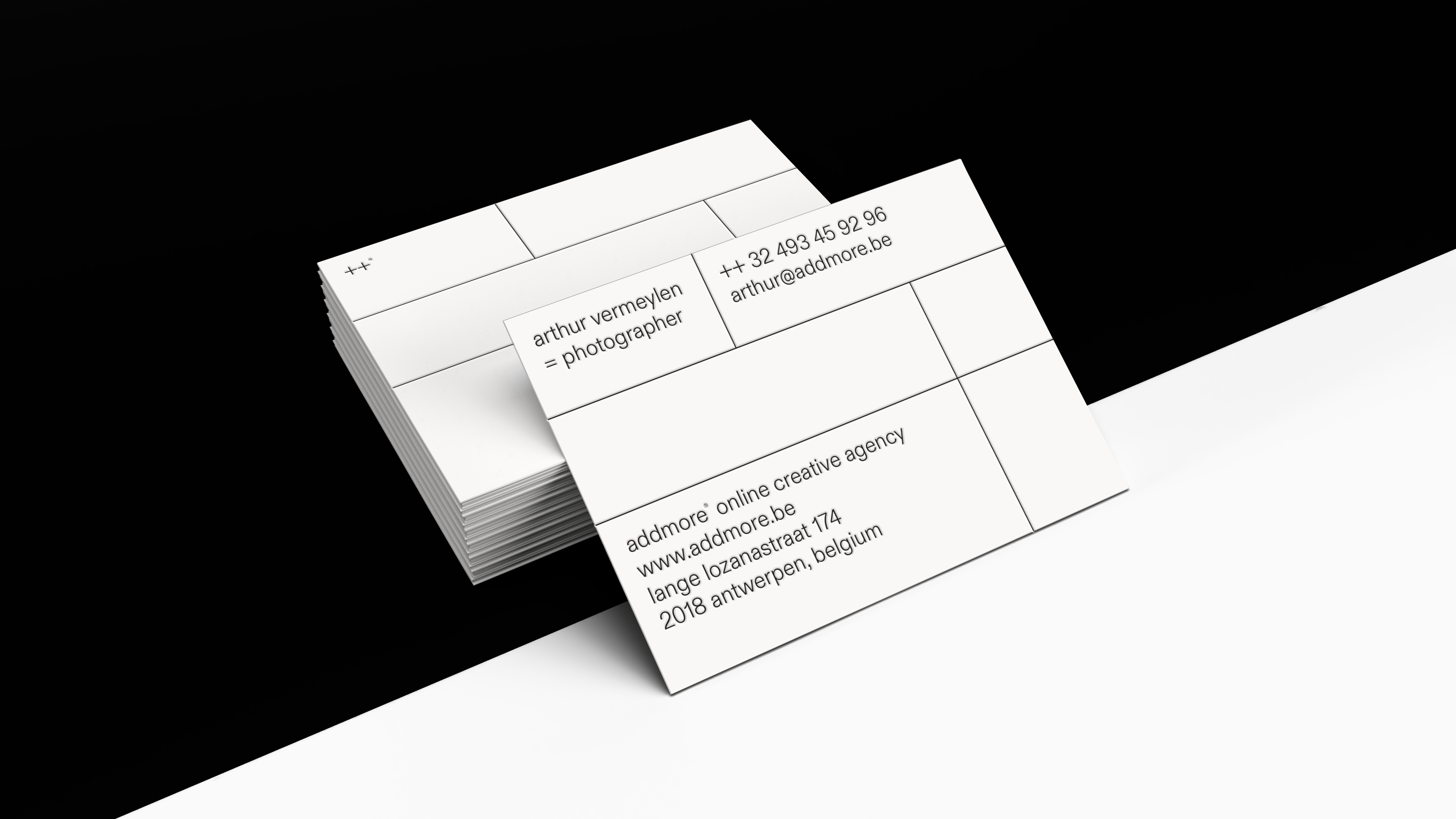 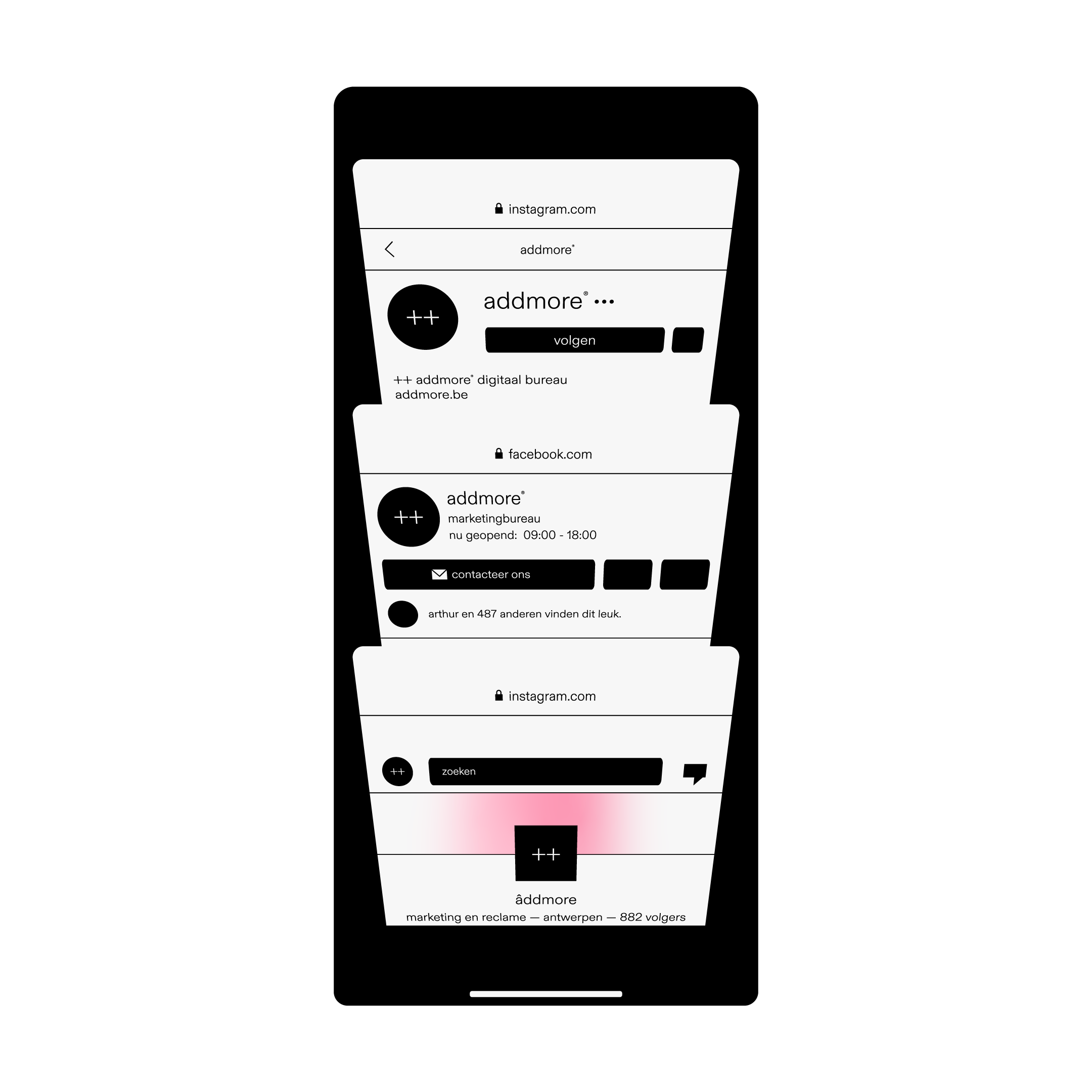 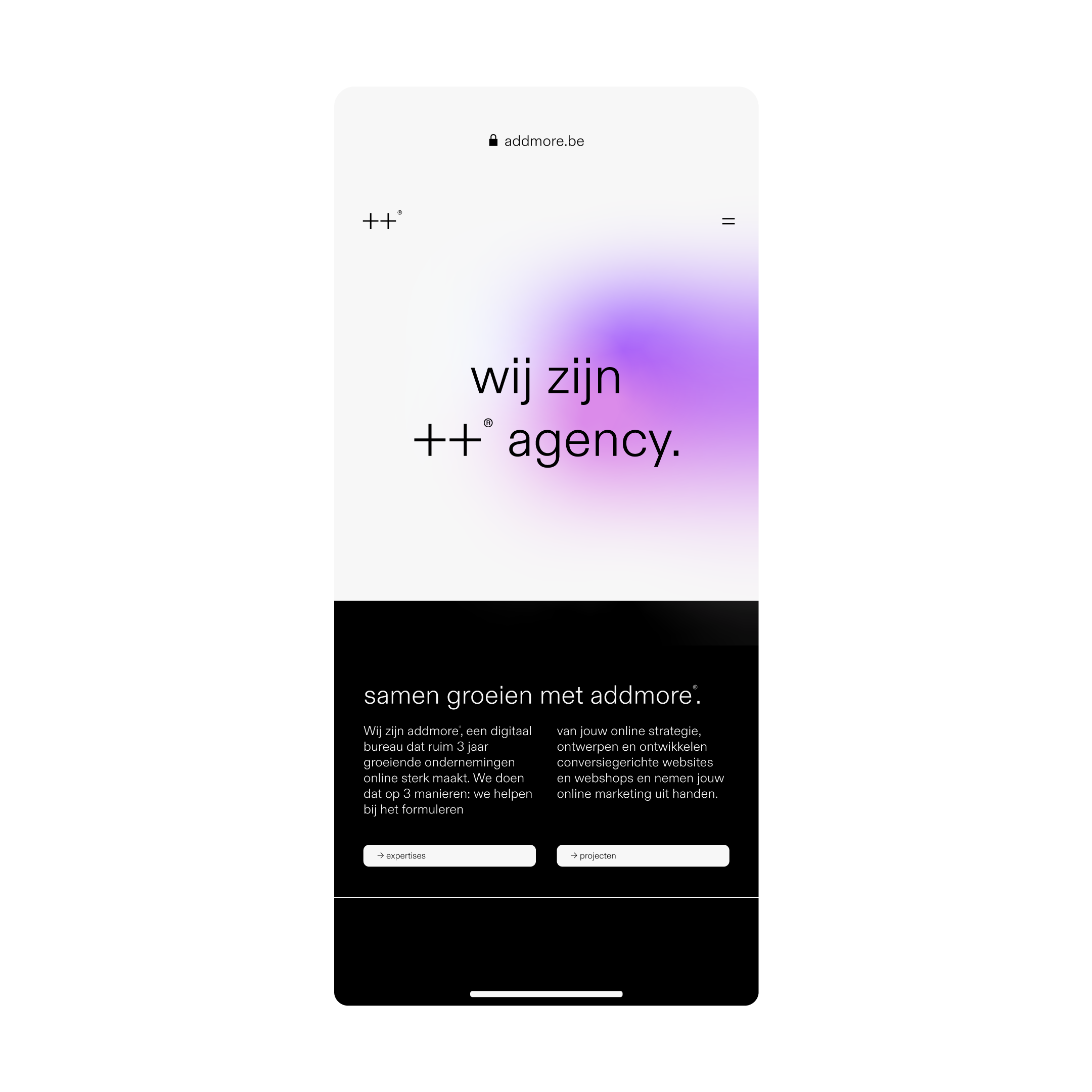 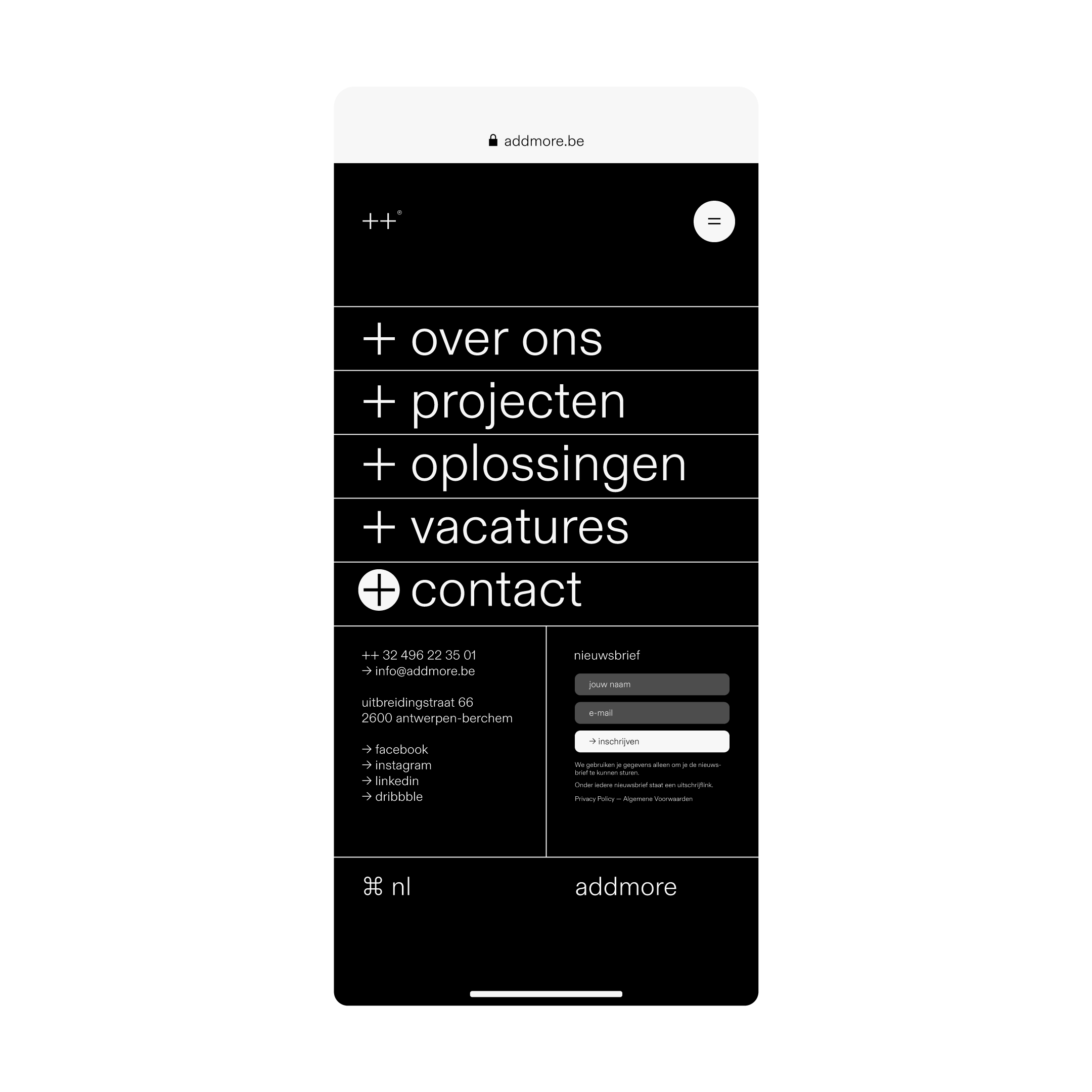 The name Addmore carries a pleonasm. Adding is inherently connected to more. The icon turns this style mistake into a brand-feature: both “add” and “more” are represented by a plus-sign. This means the icon can be typed out anywhere. The studio applies Diatype ++ as their brand typeface. Diatype is a sans serif typeface designed by Dinamo’s Fabian Harb and Johannes Breyer. The neo-grotesque is informed by and named after pre-digital typesetting machines previously used to typeset text on light-sensitive film. It’s warm, yet sharp and conscientious. The ideal studio-face. The font in use is Diatype ++ Light. The only difference between the bespoke and original font is the addition of an altered “+” in the glyphset. 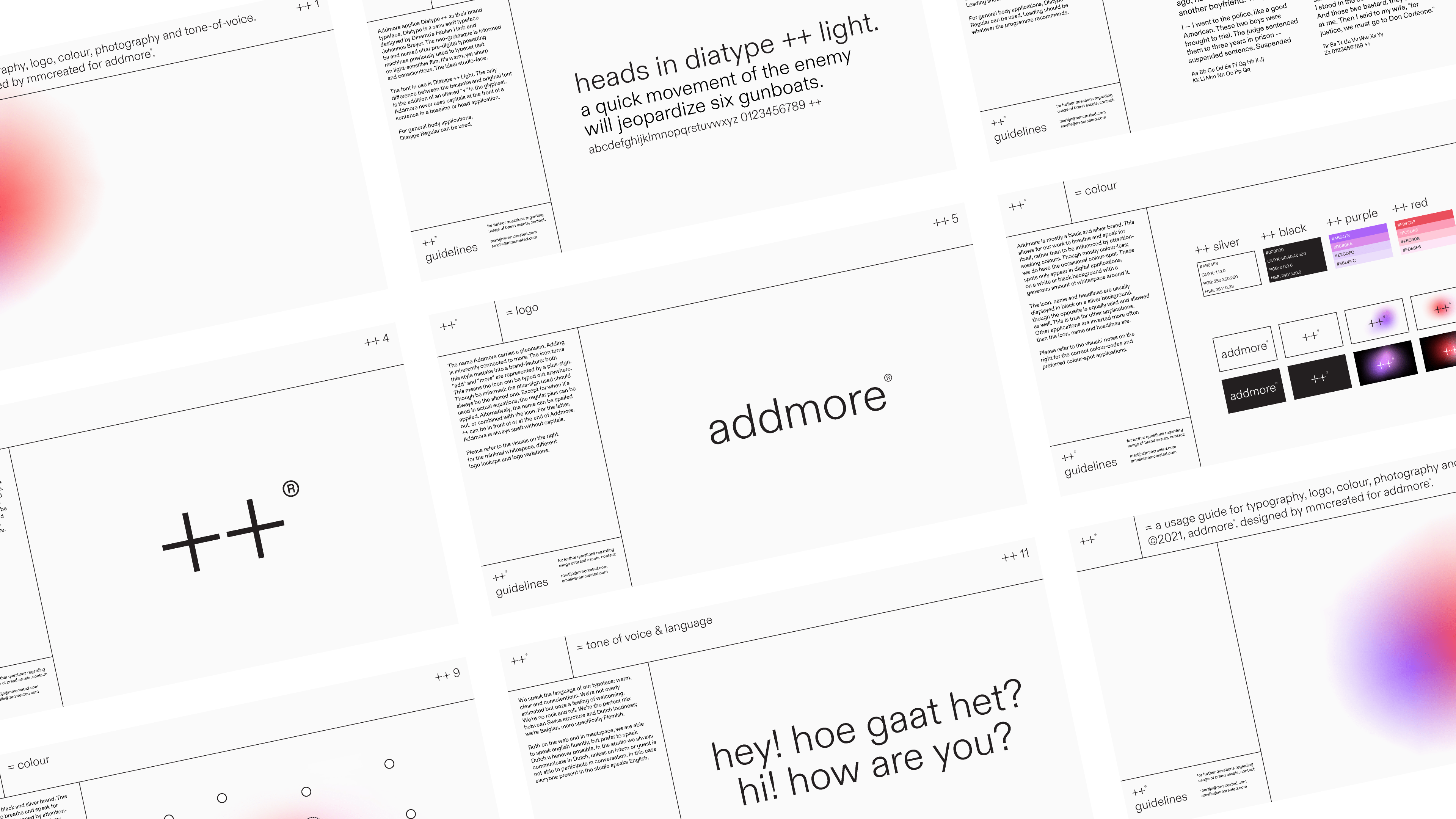